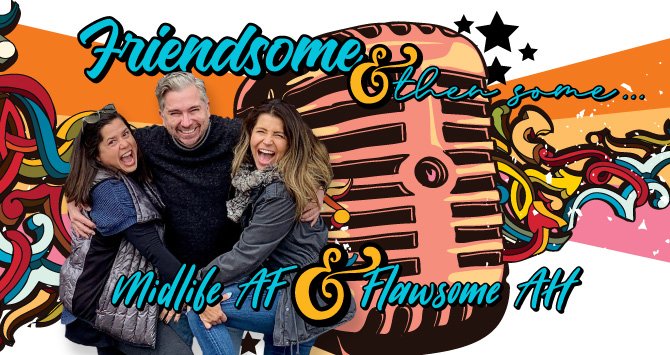 Three best friends from three very different lives started a podcast about all things midlife. Because #MidlifeMatters! Join us here for updates on upcoming podcasts, inspiration, advice, musings, love and laughs. Everyone needs to have a Friendsome!!

Mindy Stearns is best known as one Oprah’s favorite audience members! She was performing animal calls during the the pre show warm up and was invited on stage. That appearance and follow up visits as a guest on the show catapulted her into a successful career in radio and television. Mindy worked as an entertainment anchor/reporter for Entertainment Tonight, KTLA Los Angeles, and also played roles in The Princess Diaries and Seventh Heaven along with her voice-over and commercial work. Mindy, like JLo, is a proud member of the 50 club and will celebrate 17 years of marriage to her husband Glenn Stearns, who hapens to be the star of Discovery Channel’s highly rated series “Undercover Billionaire.” Together, they love a blended family of six with two teenage daughters and two teenage granddaughters. She is MidlifeAF!

Michelle Orrego is a midlifer at 48 years young, a single mom of two boys and two pets – the Noah’s Arch of Momville. From the Washington D.C. area she moved to Los Angeles 22 years ago, and started as Segment Producer and Entertainment Producer for the KTLA Morning News. She’s won Emmy’s and a Golden Mic for producing Primetime Specials. Then produced original content and commercials for YouTube with various advertisers such as; Coke, Cherrios, Cannon, & Dawn. Currently, she is media coaching, freelance producing, and is also a licensed California Realtor. She’s absolutely obsessed with real estate, interior design, and helping people buy a home – as it’s one of the biggest moments of their lives!

JD Cargill is an entrainment reporter, producer and small business owner based in Los Angeles, California. He is the founder and president of Mid-Century Media — a specialized video production company serving the entrainment industry. Since 2014 he has partnered with ArcLight Cinemas to create, produce and host ArcLight Stories, a first-of-it’s-kind Hollywood interview series developed specifically for the big screen. Prior to MCM, Cargill spent a decade at CNN interviewing thousands of filmmakers, talent and industry newsmakers as the network’s principle journalist assigned to cover the motion picture industry. Before CNN, Cargill was an entertainment reporter for Rise TV on UK’s Channel 4 and senior entertainment producer for KTLA’s News@Ten. Cargill has been honored with an AP Award, LA Press Club Award and for his contribution to four Peabody Awards and a Dupont Award presented to CNN. Cargill resides in Pasadena, California with his partner George, their two dogs Lucy and Ethel.